What is a pet microchip?

Pet Microchip implants are about the size of a grain of rice usually measuring 8- 12mm, we supply the smaller 8mm x 1.4mm type that are easier to  implant. Our chips are FDX-B, ISO 11784/11785, ICAR certified modern implants that are manufactured to last approximately 25 years. Each chip transmits a unique reference number that is 15 digits long, it is this reference that we use to register your pet on our database for the duration of it's lifetime. The references are read using a specialised reader, these are available to rent or buy.

If your pet is already microchipped just rent one of our readers, tell us the reference number and return the reader to us, we will then add your pet to our database using that chip ID, there is no need to implant another chip.

How do they work?

The basic technology behind pet microchips traces back several decades. But, it wasn't until recently that the devices became cheap enough to hit the mainstream pet market.

A pet microchip uses radio frequency identification (RFID)technology. RFID, as the name implies, uses radiowaves as a medium to transmit information. An RFID tag stores data and, using electromagnetic forces for power, communicates that data to a device that interprets it.

RFID tags come in different forms. Microchips in animals don't need to actively transmit information; they just hold information (a unique identification number for the pet). This type of tag, dubbed a passive RFID tag, has no battery and no internal power source. Rather it sits completely inert in the animal, waiting to be read.

A microchip capsule is roughly the size of a grain of rice and incorporates several components to help it do its job. First, the glass material that encapsulates the device is biocompatible. That means it's not toxic and doesn't hurt the animal's body, so your pet won't experience an allergic reaction to the device after implantation. Some versions of the microchip also include a cap made of polypropylene polymer to keep the chip from moving around once it's inside the animal. The polymer works by encouraging connective tissue and other kinds of cells to form around the capsule to hold it in place. Although surgical removal of the device is difficult, microchips don't expire or wear down. They're good for the life span of the pet.

Inside the capsule, you'll find the actual silicon microchip that holds the important information, as well as a tuning capacitor and an antenna coil. The capacitor receives power and sends it to the microchip. The microchip's information can then be picked up through the antenna, which is a copper coil.

Because it has no internal power source, a microchip like this needs a reader or scanner (also called an interrogator) to energise it. Often, manufacturers of microchips donate scanners to animal shelters. When set to the correct frequency, the scanner "interrogates" the microchip by invigorating the capacitor with electromagnetic power. When energised, the microchip capsule sends radio signals back to the scanner with the identification number. The scanner can then interpret the radio waves and display the identification number on an LCD screen (liquid crystal display screen).

Microchips can be implanted by a veterinarian or at a shelter. After checking that the animal does not already have a chip, the vet or technician injects the chip with a syringe and records the chip's unique ID. No aesthetic is required it is a simple procedure and causes little discomfort: the pain is minimal and short-lived. A test scan ensures correct operation.

An enrolment form is completed with chip ID, owner contact information, pet name and description, shelter and/or veterinarian contact information, and an alternate emergency contact designated by the pet owner. Some shelters and vets designate themselves as the primary contact to remain informed about possible problems with the animals they place. The form is then sent to ThaiPetID for registration on our database. ThaiPetID provides a 24-hour telephone service for the life of the pet. Some veterinarians leave registration to the owner, usually done by email, but a chip without current contact information is essentially useless.

The owner receives a registration certificate with the chip ID and recovery service contact information. The information will also be imprinted on a collar tag worn by the animal, the certificate serves as proof of ownership and is transferred with the animal when it is sold or traded; an animal without a certificate could be stolen.

Some authorities and shelters examine strays for chips, providing the recovery service with the ID number, description and location so they may notify the owner or contact. If the pet is wearing the collar tag, the finder does not need a chip reader to contact the registry. An owner can also report a missing pet to the recovery service, as some vets look for chips in new animal patients and check with the recovery service to see if it has been reported lost or stolen.

Increasingly some veterinarians scan an animal's chip on every visit to verify correct operation. Some use the chip ID as their database index and print it on receipts, test results, vaccination certifications and other records. 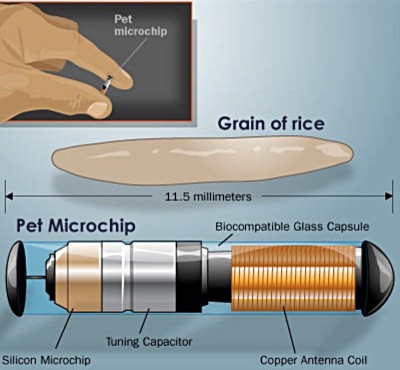 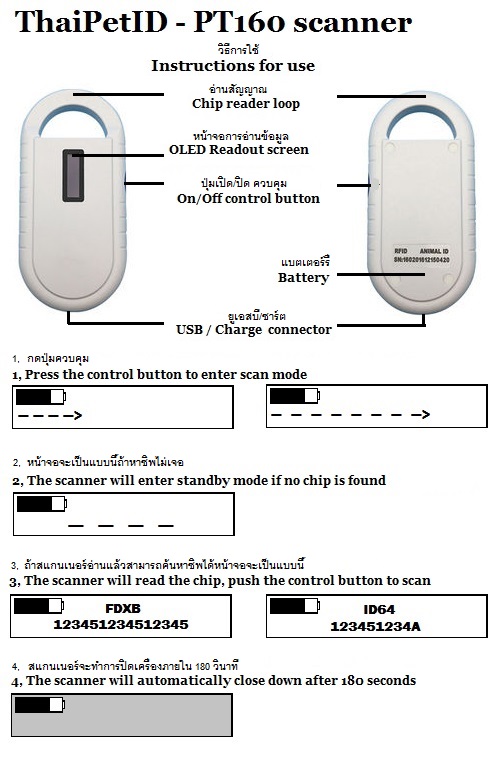